Preventative maintenance has always been a difficult subject for me. The manufacturers all recommend an annual visit to go over their instruments in the hopes that small issues would be dealt with before they became large issues, but it’s never easy to tell a client that their perfectly functional system requires thousands of dollars in maintenance. That being said, over the last 40 years, we’ve performed countless PM routines all over the world on at least 13 different models of XRD and XRF instrumentation and almost every one of those visits has turned up at least one issue which needed attention for one reason or another. This will be the first of several posts detailing various problems we’ve encountered during these visits.

A long time client at one of our most prestigious national laboratories had gone several years without any maintenance being performed on their Siemens D500. Over that time, corrosion built up in this small receiving area before the incident beam optics. I should be very clear that this has no effect on the shutter assembly, fail-safe features or safety in general. However, if left unchecked, flakes will eventually fall into the beam path. The symptom is simply that intensities are lower. This is not the first time we’ve been called out to replace a tube only to find that the low intensities were due to attenuation. Running through a basic PM before installing the new tube saved $6000 of your tax dollars. 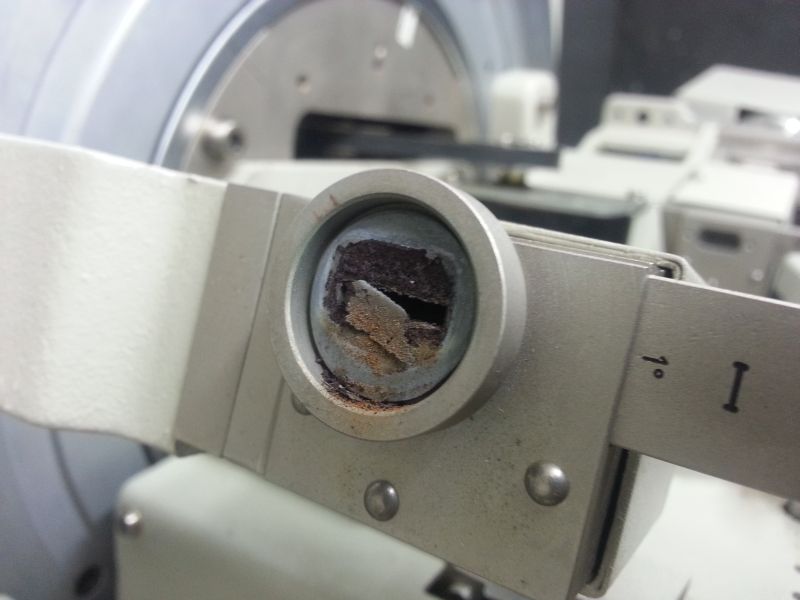