The most common practice in powder XRD is to simply fill the recessed well of a sample holder with finely ground powder and start collecting data. That works for a great many users, but everyone is eventually faced with a more complicated situation at some point. At Texray, odd samples and special requirements are the norm. The photos below represent some of the common and not-so-common needs we’ve come across. Many of these are one-off designs fabricated by KS Analytical Systems. 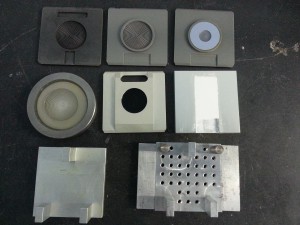 The top row shows the three most common holders we see with various well depths. These are almost exclusively used for loose powders. The goal is to get the surface of the sample into the plane of diffraction with as little of the holder in the beam as possible. The plastic material has a very high scattering coefficient which creates a hump in the data around 13 degrees 2Theta. These are all designed for the 40-position sample changers from Siemens (now Bruker).

The second row gets more interesting with a special holder for high volume instruments. This was designed for magnetic handling and worked great as long as you don’t mind the low angle scatter problem of the plastic and aren’t working with ferrous powders.

The middle is one we use for collecting data from membrane filters. These are notoriously hard to hold down with any precision so they get mounted from the rear and held against a “lip” to keep them both flat, and in the plane of diffraction. They work wonderfully.

Next we have a simple side load sample holder. I’m a big fan of these and use them anytime I’m running loose powders on a single sample stage. It allows the user to load with a very smooth top surface that’s perfectly flat without creating any preferred orientation. Preferred orientation is frequently caused by pressure being applied to the basic top-load holders in an effort to get a flat surface. It is to be avoided whenever possible. Notice that the holders are all Aluminum at this point. Most custom holders are Al or a combination of Al and stainless steel depending upon the special properties desired.

The last row are good examples of odd-shaped sample holders. When you’ve got a rock with one flat surface or a little chip of some material, you still need to keep it in the plane of diffraction. The user simply places a ball of clay in the middle of the holder, the sample goes on top of that and then a glass plate is used to crush the clay (with the sample on top) down such that everything is in plane with the elevates posts. These posts interface with the machine to define the plane of diffraction right across their surface, thus the sample is right where it needs to be without any complicated engineering or microscopic adjustments. 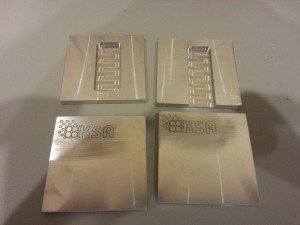 Custom holders for a D500 user. Side load as well as top-load in Al. 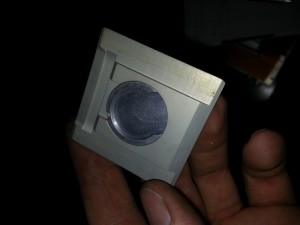 Side load precision without the possibility of powder falling out at low angles. 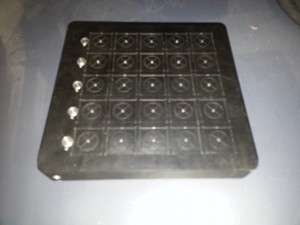 Vacuum holding is common when working with semiconductors or other materials with very consistent thicknesses. 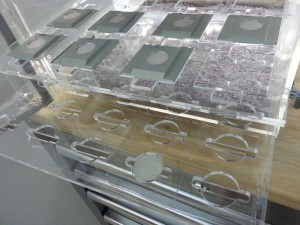 We needed to keep our standards in our desiccator cabinet as well as store membrane filters long-term. Custom laser-cut shelves make this easy. 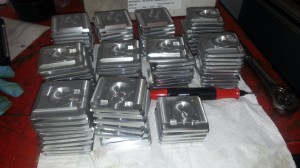 A typical run of custom sample holders for a high volume XRD operation. This user actually has a custom loading tool that allows for multiple holders to be filled simultaneously. 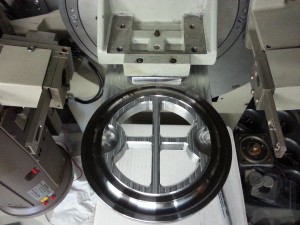 This is a completely custom stage designed to hold a large thrust bearing race such that the bottom of the groove is in the plane of diffraction for retained austenite and residual stress measurements. The bearing is held in place by magnets.

XRD is the preferred analytical method of testing free crystalline silica in workplace atmospheres.   At Texray, we offer respirable silica testing using the NIOSH 7500 method, so we thought those of you in industries such as concrete, construction, glass, milling, mining, hydraulic fracking and sandblasting will find it important to know that OSHA has proposed an update to the current rules.  The most notable change is a decrease in OSHA’s Permissible Exposure Limits (PEL) from 100 mg/m3 of air for general industries and 250 mg/m3 of air for construction industries to 50 mg/m3 of air for all industries.  OSHA, along with other independent occupational health institutions, feel the current PELs are outdated and inadequate, and rightfully so, considering limits were last set in 1971 and based on 1960s research.  However, most of these industries may not feel an impact from such as change, as many employers already use preventative measures to reduce dust exposure.

Would this rule change affect the analytical testing procedure? 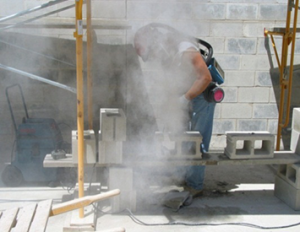 No, XRD limits of detection (LOD) for NIOSH 7500 are 0.005 mg/m3 for an 800 L air sample.  This rule change would not affect the testing method, since the LODs for silica in the form of quartz and cristobalite are well below the newly proposed PEL.  However, the rule change may increase the number of industrial sites needing to test their work environments for respirable silica.

According to OSHA, “The proposed rule is expected to prevent thousands of deaths from silicosis, lung cancer, other respiratory diseases, and kidney disease. OSHA estimates that the proposed rule will save nearly 700 lives and prevent 1,600 new cases of silicosis per year once the full effects of the rule are realized.”  The rule change was proposed last September and the hearing was recently concluded at the beginning of April.  Final decision will be coming soon. We will keep you posted.

In my last post, I hinted towards the importance of literature searches before attempting to analyze a new material, and then someone in one of my discussion groups posted a link to the 30 Most Downloaded Advanced X-ray Analysis Articles from the ICDD. I thought some of you might find this helpful, so I am reposting the link.

The articles are free to download and written by well-known, respected professionals that have been in the business of X-ray analysis for many years. The topics range from sample preparation to applications to instrumentation hardware. Enjoy!