Siemens goniometers are about as sturdy as they come. Large diameter gears and bearings spread out forces across a wide area resulting in smooth and stable performance as well as very high load handling due to the added leverage of this arrangement. For this reason, they’ll run for many years even after the grease inside has become hard and contaminated with dust. Most users don’t even know their goniometer is getting stiff until we check it during a PM. Catching this before the goniometer starts to hang up saves thousands of dollars and weeks of down time. Our goniometer rebuild service involves complete disassembly of the goniometer down to individual ball bearings for a thorough cleaning. We’ve tried to duplicate this procedure on-site with very limited success as the large components are best cleaned in a full size solvent bath and it’s special brackets are required to avoid concentricity issues during reassembly. All the critical electronics are replaced during reassembly along with fresh lubrication. The best case scenario is that we catch issue far enough in advance to get a matching replacement goniometer rebuilt and shipped out. There are too many variants to keep rebuilt units in stock all the time. This way we only need to come to the site once to swap the goniometer and perform the necessary zero alignment. The old goniometer goes back in the same crate and we’re done in a day or two. Waiting till a hard failure of the goniometer means a trip out to identify the problem and disassemble the system. The goniometer is shipped in for a rebuild which can easily take a few days to complete before being shipped back along with a second on-site visit. I’d estimate the extra cost to be right around $6k plus the cost of shipping and two weeks of downtime. We certainly don’t mind going this route, but if it were my money, I’d rather spend it on a comprehensive check of the machine rather than emergency services. 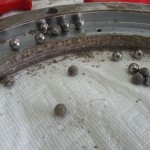 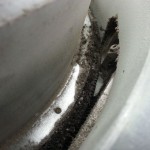 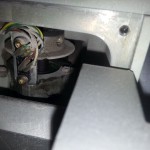 These pictures are from one of our first full rebuilds. This instrument was installed in a D5000-MATIC instrument at a cement plant. I’ve never seen so much dust inside a goniometer. Another particularly rough one was from a horizontal goniometer on a single-crystal system at a university. The students had a terrible habit of breaking Si(100) wafers and dropping them onto the goniometer face. Those little shards made their way into the bearings resulting in a rather perilous rebuild with shards of Si throughout it.