Everyone wants to see their instrumentation perform at its peak, but all too often, the instrumentation is not the weak link in an analytical strategy. We see this in WDXRF and XRD, but recently had the opportunity to work with a client on their OES sample prep. This large steel mill has been using an automated Herzog sanding machine for many years. I’ve seen it in action and it’s a truly impressive tool. The engineers at Herzog have decades of experience building automated prep solutions and definitely worked hard on the design. However, speed was the key factor when this method was developed. There are few ways to prep a metal coupon faster than running it against a sanding belt. The sanding method had the added benefit of an extremely hard cutting medium (usually Al2O3) which meant that a single preparation procedure could be used for all steel grades and even worked when careless workers chose to water quench hot samples rather than allowing them to temper a bit by cooling in air (making them extremely hard). The downside of this method comes down to surface quality. Sanding will always leave a rough surface with linear troughs/grooves which create a variable surface area as well as shadowing. These effects are detrimental to light element sensitivity and as tolerances are tightened, the lab supervisors were forced to look to other methods. We began talking about this project over a year ago when the WDXRF user mentioned the lower detection limits that were soon to be implemented. I’d had some experience with sample preparation by milling, but usually more exotic alloys. There are certainly more than a few options available for automated milling, but their high cost and space requirements put them out of the running for this situation. My recommendation was to purchase a lower level CNC milling machine and automate as much of the process as possible to simplify operation and limit opportunities for error. I’m happy to say that the first tests earlier this month were a great success. The coupons come out with a very smooth surface in about the same amount of time it took to run through the sanding machine before. There are still some things that bear consideration with milled samples. Not the least of which is contamination from the cutter. This client is unlikely to be bothered by Al2O3 from their sanding media, but small amounts of Tungsten Carbide steel (WC) rubbing into the surface could present an issue as cutters wear out. Luckily, the tools we’re using are indexable and not too expensive which allows users to change cutters frequently. It’s important to maintain a sharp edge and correct settings for this type of work in order to avoid “rubbing” through the material. This occurs when the tools is rotated too fast or fed too slowly. Material is pushed out of place rather than being cut. This causes contamination, premature tool wear and smearing of the surface. All of which have a detrimental effect on the analysis. I spent a solid day working out the initial conditions and there will still likely be many adjustments and changes before this becomes the primary production method.

All in all, this was a great project to work on. The improved detection limits will dramatically improve their analysis of light elements, the automated vise and mill will make it even easier and faster to prep material than before and we’ve done it all at a fraction of the cost expected. One thing I should note here is that this particular milling machine was chosen due to its exceptionally small size and low cost which were key requirements of this job. Given a less restrictive environment, I would have recommended a much different solution.

The last post in this series showed what can happen to the optics path of an XRD system in the wrong environment after several years of neglect. The end result of this kind of build-up is attenuation of the beam. The user will see this as a loss of intensity, but little else. In the XRF world, things are a little different because everything in the beam path can be expected to fluoresce as well as attenuate the beam. Depending upon the position and type of material, this can cause a range of interesting effects.

In the most basic case, the beam is simply attenuated as it would be in the XRD causing a loss of intensity. This would be the case with certain types of blockages in the incident beam. Several years ago I got a call from a senior tech at Bruker who was trying to help a client remotely. They’d been running fine until their intensities abruptly dropped nearly in half across the board. Checking the electronics and searching for evidence of a broken sample yielded no answers. Running previously analyzed samples proved that this was definitely not sample related. Owing to the urgency of their situation, I flew out right away with a solid kit of spare parts only to find a Post-It note sitting right on the port of the tube. Just in case there was any doubt, it had the identifier of the first sample which exhibited the symptoms written on it. It must have gotten stuck to the bottom of the cup before being loaded into the autosampler and carried all the way into the measurement position. We had a good laugh (and still do). Other attenuation issues aren’t so obvious. A client running heavy greases in a He environment saw a 90% drop in light element intensity while heavy elements performed fine. After some remote trouble-shooting we were able to eliminate several possibilities, but fell short of a real solution. As it turns out, the issue was caused by a crack in one of the He flush lines. These instruments don’t simply flood the chamber with He during this cycle. Rather, they start by opening two He valves (one high flow and one low flow) while turning on the vacuum pumps. Once the lines are purged, the valves close and a vacuum is pulled on the chamber. At this point, the pumps shut off and the chamber is vented to He. The split hose was leaking a very small quantity of air into the chamber at the same time it was venting to He. Even this very small amount of air was enough to devastate light element intensities. The pictured issue is another very common problem. Dust from powdered samples or worse, spills or drips from liquid samples can build up on the port of the tube. The result of contamination like this is usually minimal attenuation, but it can result in a very noticeable change in the reported intensities for a given element. Most users would catch this when running a monitor standard and many would simply run a drift correction to compensate, but the best course of action is to get your service provider involved right away. They’ll be able to assess the situation quickly and might offer a better solution than simply patching the issue with a data massaging correction. At least they’ll be in the loop if the symptoms become more serious.

There are some options for keeping your port safe from this kind of contamination. We like superfluous films which keep bits of material from falling onto the tube. Mylar, Kapton (Polyimide) and Prolene (Polyprolylene) are popular choices depending upon your application. Bruker systems starting with the S4 offer a filter position with a Be shield which protects the tube window itself and works well. More exotic options (inverted optics) promise to eliminate this problem, but this offers its own challenges. For instance, the users most concerned about this kind of contamination are running liquids. Pulling a vacuum on a liquid cup makes a mess no matter where your optics are and running a liquid in an inverted cup is an added complication and opportunity for error that we’d prefer to avoid.

We Live for This Stuff 2

Most of you already know that CNC machining has been a hobby of mine for several years now. Few things are more mesmerizing to me than watching shards of metal fly off a block until the part I designed emerges at the end. I got a new project last week that I thought would be fun to share and in case you’re curious, I actually run the mill in my home garage so I can work into the evening without sacrificing too much time with my wife and kids. The first and second generation D8 XRD systems came with a very large octagonal housing. These are very useful when you need lots of space for extended optics, accessories or anything else you might need to store. They are particularly hard to ship though. The factory method calls for lots of bracing and crating to keep the large glass panels safe, but when one of these is shipped to us, it rarely gets this treatment. As long as the handlers are careful, this isn’t a problem, but we’ve still seen many of them with the handles broken off the bottom of the doors. Replacements are available directly from Bruker, but I’m not one to pass up a chance to run the milling machine and 3D printer.

These new Al handles are beautiful and were a great project for me to get familiar with the new mill. I’ve made several extra sets just in case the need arises in the future too. Printing a prototype before machining to verify dimensions. The handles are made in three steps starting in with a 4x8x1 block of 6061 Aluminum. The second operation finishes the opposite side in a vice fitted with custom made jaws. 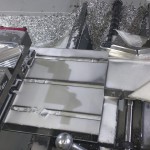 Operations one and two occur simultaneously as parts are move from vice to vice. This part actually lacks one of the grooves, but shows the cylindrical end from the third operation.